Riding on Hashim Amla and Dean Elgar’s centuries, Faf du Plessis–Temba Bavuma added 51-runs to take South Africa’s first innings total to 496 for 3. Bangladesh did receive a smidge of relief with wickets, however, du Plessis and Bavuma s ensured the final session was dominated by the Proteas. Du Plessis and Bavuma remained unbeaten on 26 and 31 respectively.

Bangladesh received a respite at the start of the second session when Islam got the priced wicket of Hashim Amla for 137. Bangladesh got a reason to celebrate after 63 overs. It also reminded many that Test cricket has come a long way as it was also the 70,000th wicket of the longest format.

In the meantime, where Elgar was preparing to celebrate his maiden double-century, Bangladesh decided to dash the hopes of the opener. Just like Markram missed his debut Test century by 3 runs, Elgar fell for 199. Elgar s adrenaline rush got the better of him. He became the overall 10th batsman and first South African to fall for 199.

Unfazed by the drama, skipper du Plessis gained some inspiration from his teammates and was off the mark with consecutive boundaries to Mustafizur. Bavuma too tagged along with some timely boundaries.

Earlier, Amla slammed his 27th Test century. He joined former captain Graeme Smith as the country’s second-highest century-maker, behind only Jacques Kallis, who made 45.

The second wicket partnership between Elgar and Amla was worth 215. Bangladesh’s bowlers had again went without reward and seldom threatened to take a wicket on a slow pitch which offered neither seam movement nor swing, although there was occasional uneven bounce. 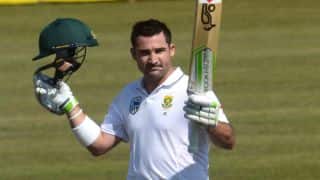