At close, Bangladesh were 127 for 3 after South Africa declared on 496 for 3 during tea break.

South Africa maintained their grip over Bangladesh. They grasped 3 wickets before stumps on Day Two of the first Test at Senwes Park, Potchefstroom. Bangladesh are trailing by 369 runs after South Africa declared on 496 for 3 at tea. The declaration caused further turmoil for Bangladesh. Opener Tamim Iqbal was off the field nursing an injury. That kept him out of the game for 48 minutes. By then Bangladesh had lost both openers, Imrul Kayes and wicketkeeper Liton Das. Kagiso Rabada made an early inroad while Morne Morkel followed up. Liton, however, defied the pacers with 25.

Then skipper Mushfiqur Rahim took the matter into his hands. He made an aggressive 57-ball 44. Of course, he was lucky: he was dropped by Dean Elgar and Keshav Maharaj on 6 and 15. He eventually fell to Maharaj. At this stage Tamim joined hands with Mominul Haque. The two steadied the boat as they remained unbeaten on 22 and 28 respectively.

Earlier, the South African batsmen who came to play fitted in their boots well. Elgar began the proceedings with his highest Test score of 199. His opening partner, debutant Aiden Markram, had been run out 97 on the first day. Hashim Amla followed suit with 137.

Elgar and Amla added 215 runs for second wicket. They frustrated the Bangladesh bowlers throughout their stand. Finally, Shafiul Islam broke the stand, getting Amla. It was also a historic moment, for Amla became the 70,000th man to be dismissed in Test cricket.

Before that, however, Amla had picked up his 27th Test century in an exhibition of fluency. He joined former captain Graeme Smith as the country s second-highest century-maker, behind only Jacques Kallis, who made 45. Amla scored his runs off 200 balls with 17 fours and a six. Elgar, meanwhile, looked set for a double-century until he attempted pull against Mustafizur Rahman. 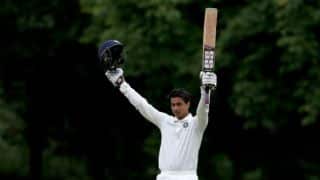 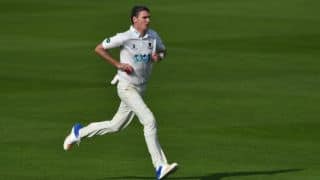