Hashim Amla and Temba Bavuma remained unbeaten on 17 and 3 respectively.

Bangladesh bounced back with tight lines and length. Their bowlers removed South African openers in the final session of Day 3 of the first Test. Dean Elgar and Aiden Markram were unable to build on the momentum set on Day 1. Taskin Ahmed and Shafiul Islam ended with apiece. However, Hashim Amla and Temba Bavuma built the lead to 230 as the day ended early due to bad light. The duo remained unbeaten on 17 and 3 respectively.

The session began with Kagiso Rabada and Keshav Maharaj cleaning off the Bangladesh tail with the new ball. Maharaj ended with 3 for 92. Rabada and Morne Morkel shared 4 wickets between them.

Elgar and Markram aimed to build on their 196 opening stand secured on the first day. After adding 30 runs on board, Elgar was gone for 18. Shafiul trapped him on leg. Soon, his partner Markram was also gone as the delivery nicked him and was caught comfortably by Liton Das.

The review showed the bat smashing the ground. Perhaps, Markram avoided chancing another review. Since, it was Amla and Bavuma who steadied the boat. The duo added an unbeaten 16-run stand for third wicket.

Earlier, it was Momimul Haque (77) and Mahmudullah (66) who avoided the follow-on scare over Bangladesh with their resilient fifties.

On a slow pitch, Bangladesh had four successive half-century partnerships between the third and sixth wickets.

Although South Africa were poised to take a substantial first innings lead, Bangladesh batted with positive intent. The tourists ensured that they would end a sequence of innings defeats in all their four previous Tests in South Africa. 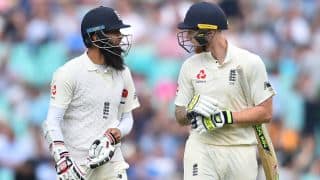