Mahmudullah and Mominul Haque put up an aggressive unbeaten stand of 60 as Bangladesh trail by 278 runs.

Mominul Haque and Mahmudullah posted a tough fight against South Africa taking Bangladesh to 218 for 4. Off the 29 overs played in the session, Bangladesh scored 91 runs and lost just a wicket. The DRS drama did keep the game tilted towards both sides. On a placid track, Mahmudullah and Mominul counterattacked Kagiso Rabada s reverse swings. The duo put up an aggressive unbeaten stand of 60 as Bangladesh trail by 278 runs.

Tamim and Mominul recovered the damage done through early loss on Day 2. They brought up a 50-run stand, the first for Bangladesh in the innings. Tamim was lucky twice to escape the DRS scare. With the new ICC rules in place since September 28, South Africa did not lose reviews.

Kagiso Rabada appealed for a leg before against Tamim in the fourth over of the day. However, umpire Bruce Oxenford turned down the appeal. The ball was clipping the outside of leg stump. If the new rules were not effective, South Africa would have lost their review. But with the beginning of new playing conditions, South Africa were in safe zone.

Tamim was caught in DRS web once again. This time Rabada s reverse swing struck Tamim on the boot. Once again South Africa appealed. This time the ball was swinging so sharply that it missed the stumps. South Africa had to do away with their review.

In the same over, Mominul too was struck by a reverse swing which was not appealed by South Africa. The ball was hitting leg.

Although Tamim was lucky twice, he could not get lucky the third time. This time Andile Phehlukwayo bagged his first Test wicket. The ball kissed Tamim s bat and Quinton de Kock dived to grab the opportunity. Tamim headed back to the hut for 39.

In the meantime, Mominul raced to his fifty with a boundary towards mid-on and was not out on 72. Gaining some inspiration from Mominul, new batsman Mahmudullah too paced up his innings. His unbeaten knock of 26 comprised of 5 boundaries before the end of the first session.

Earlier, Dean Elgar missed his double-century by whisker and fell for 199. Hashim Amla, on the other hand, put up an aggressive 137. The duo added 215-run stand for the second wicket.

Faf du Plessis and Temba Bavuma too filled into their boots well. Du Plessis and Bavuma added 51-run stand for fourth wicket, taking the score to 496 for 3. However, du Plessis decided to declare during the tea break.

The sudden declaration put Bangladesh in spot of bother. Tamim had stepped out for nursing his injury. It meant, he could return to play only after 48 minutes. Bangladesh had to open with Imrul Kayes and wicketkeeper Liton Das.

Both the openers were gone in succession, courtesy Rabada s early in-roads and Morne Morkel. Mushfiqur Rahim took the matter into hands with 44. Keshav Maharaj stole the thunder in the final hour of the session.

It was over to Tamim and Mominul who kept Bangladesh in the hunt with their overnight score of 22 and 28 respectively. 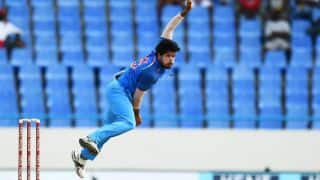