Overnight rains did try to threaten the game at the start of the session. However, Amla and Bavuma ensured to build on the 230-run lead. Mustafizur Rahman bagged Hashim Amla s priced scalp for 28. An edge got the better of Amla and caught comfortably by Liton Das.

Since, it was du Plessis and Bavuma s show. To add to the plight of Bangladesh, Bavuma was dropped on 9. Imrul Kayes injured his fingers in the process. To much relief of Bangladesh, Kayes returned to the field after nursing his injury.

Du Plessis took 5 fours and a six to reach his fifty off 55 deliveries. In the meantime, Bavuma too smashed his ninth Test fifty off 75 deliveries. He got to his milestone that comprised of 6 boundaries.

Earlier, Bangladesh had their moments on Day Three but could not prevent South Africa from moving into a dominant position. Mominul Haque (77) and Mahmudullah (66) fifties avoided a follow-on for Bangladesh after South Africa declared on 496 for 3.

South Africa were 54 for 2 when bad light brought an early close to Day Three. 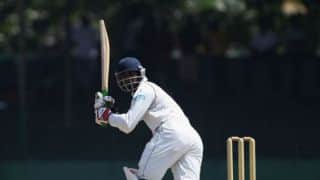