Vernon Philander was also out of action from South Africa's last Test versus England.

South Africa‘s pacer Vernon Philander is set to miss the series opener of the two-Test series versus Bangladesh this month. Nursing from a stiff back, Philander bows out of the first Test since he will not be a part of next week’s domestic season opener. According to Cricket South Africa’s policy, injured players have to play few domestic games to prove their form and fitness before being eligible for selection in the national side. The 32-year-old pacer was in good form with both bat and ball in England, but was ruled out ahead of the fourth and final Test with back spasm.

Dr Shuaib Manjra, who chairs CSA’s medical committee, told Cricbuzz, “Vernon is coming back very well and is virtually good to go. We are not going to target the first game for his comeback; we are going to target the second game. Our policy is that they need to play a franchise game or two before they come back and play for the Proteas.”

If Philander plays the second game for his franchise, Cape Cobras, he will get a chance to prove his fitness. The first Test between Bangladesh and South Africa starts from September 28. The second and final Test will begin from October 6. 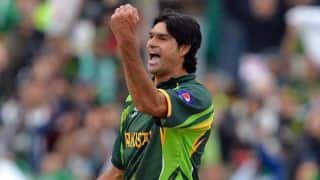