Bangladesh were 104 for the loss of six wickets after 23 overs.

Bangladesh lost another wicket as Chris Morris dismissed Sabbir Rahman in the first One-Day International at Dhaka on Friday. Sabbir was clean bowled by Morris, as Bangladesh lost their sixth wicket. Bangladesh were 104 for the loss of six wickets after 23 overs.

Earlier, Rabada destroyed the Bangladesh top-order as he became the second bowler to take ODI hat-trick on debut. Tamim went for a duck despite playing 13 balls and Litton Das went for a golden duck. Rabada was on hat-trick as Mahmudullah walked out to bat. However, he was trapped leg before and Mahmudullah had to walk back. He is the second bowler to complete hat-trick on ODI debut. Taijul Islam was the other cricketer to achieve such a feat. Rabada picked his fourth ODI wicket on debut as he removed Bangladesh’s opener Soumya Sarkar.

Bangladesh won toss and elected to bat as the start of the match was delayed by rain. The match was curtailed to 40 overs per side. 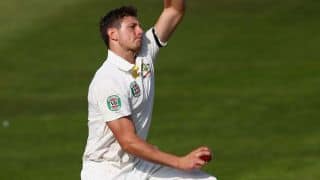