Kagiso Rabada is the second bowler to achieve such a feat.

Kagiso Rabada  took hat-trick on his One-Day International debut as he sent Tamim Iqbal, Litton Das and Mahmudullah packing in the first of the three-match series against South Africa on Friday at Dhaka.

Tamim went for a duck despite playing 13 balls and Litton Das went for a golden duck. Rabada was on hat-trick as Mahmudullah walked out to bat. However, he was trapped leg before and Mahmudullah had to walk back. He is the second bowler to complete hat-trick on ODI debut. Taijul Islam was the other cricketer to achieve such a feat.

Here’s a table of bowlers taking hat-trick on debut:

Earlier, Bangladesh won toss and elected to bat as the start of the match was delayed by rain. The match was curtailed to 40 overs per side.

Last year, Taijul Islam created record when he became the only fourth bowler in cricket history to register a hat-trick in debut match in international cricket. Taijul also became the first bowler in One-Day International (ODI) history to achieve this feat.

Taijul claimed four for 11 off his seven overs to help Bangladesh bundle out Zimbabwe for a paltry 128 in the fifth and final ODI at the Shere Bangla National Stadium in Dhaka. Taijul returned with the figures of 7-2-11-4 after the hosts were asked to bowl first.

England’s Maurice Allom, New Zealand’s Peter Petherick and Australian pacer Damien Fleming are the only bowlers to have achieved this feat in international cricket. All three bowlers recorded their achievements in Test cricket. Chamu Chibhabha dismissed for 3 in India vs Zimbabw 2015, 1st ODI at Harare 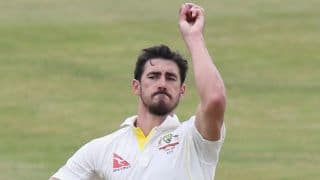