The new ICC playing conditions for Tests, ODIs and T20Is have come into effect with the series between Bangladesh and South Africa.

In addition to the amendments to the playing conditions, a revised ICC Code of Conduct will come into effect on Wednesday. According to the changed playing conditions, there are no more compulsory catchers required in overs 1-10 in one-dayers and there are no more batting Powerplays. Now five fielders allowed outside the circle in overs 41 -50. If Team 2 is batting and a match is close to conclusion at the time the scheduled interval is reached, either captain can make a request to the umpires to extend play by an extra 15 minutes/minimum 4 overs to obtain a result. Read: ICC to scrap batting powerplay, implement free-hits for all no balls

Once the interval is taken, the referee has also been given discretion to reduce the interval time if he feels a result is imminent. From now onwards, a Free Hit is to be awarded after all modes of No ball. If the No ball was called for having too many fielders outside the circle, the field can be changed for the Free Hit even if there is no change in striker, but only to the extent of correcting the breach. Read: Dave Richardson: DRS will remain optional for the time being

Now a bowler is permitted, before releasing the ball and provided he has not completed his usual delivery swing, to deliberately attempt to run out the non-striker. It is applicable in Tests, ODIs and Twenty20s. According to change to clause 3.2 of the DRS Playing Conditions, teams must request a Player Review within 15 seconds of the ball becoming dead, but one exception has now been added. The on-field umpire can now use the TV umpire to assist in detecting whether the ball has been in contact with any part of SpiderCam – the camera, its apparatus or its cables above the playing area. There have been no changes to the Women’s Test, ODI or T20I playing conditions at this time. 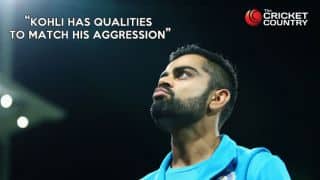 Virat Kohli has qualities to match his aggression: Viv Richards