Bangladesh were 28 for the loss of 2 wickets after 4 overs.

Kagiso Rabada picked up his second wicket as he bowled Litton Das in the second One-Day International (ODI) at Dhaka on Sunday. Das scored 17 off 14 balls, as Rabada bowled a good length delivery to remove his off stump. Bangladesh were 28 for the loss of 2 wickets after 4 overs.

Earlier, Rabada removed Tamim Iqbal off his first ball. He picked up six wickets and registered a hat-trick in the first ODI match, which was also his debut, bowled Tamim for 5 off 7 balls.

South Africa were bowled out for 162 by Bangladesh. Nasir Hossain, Mustafizzur Rahman picked up three wickets each and Rubel Hossain picked up two wickets to help Bangladesh restrict South Africa to a low total.

Faf du Plessis was once again the top-scorer for South Africa with 41. Farhaan Behardien put up a fighting show lower down the order with 36. 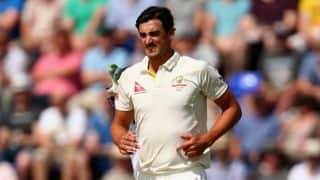