South Africa were 74 for the loss of 4 wickets after 24 overs.

South Africa lost fourth wicket when David Miller was caught by Mashrafe Mortaza at midwicket off Mahmudullah’s delivery in the second One-Day International (ODI) at Dhaka on Sunday.

Miller, who walked after Rilee Rossouw fell, scored 9 from 24 balls. Miller tried to flick the ball while going down the crease only to find the ball land in Mortaza’s hands. South Africa were 74 for the loss of 4 wickets after 24 overs.

Earlier, spinner Nasir Hossain bowled Rilee Rossouw off the first ball for 4 off 24 balls. Rossouw tried to big hit but the ball sneaked in between bat and pad and hit the off stump.

Rubel Hossain bowled Hashim Amla as the batsman tried to defend one good delivery straight on the off stump but missed it and ball knocked off the off stump.

Earlier, Mustafizur Rahman picked up his first ODI wicket since the India series, when he removed South African opener Quinton de Kock for 2 off 9 balls. Mustafizur bowled a good length delivery which De Kock tried to defend but edged and Sabbir Rahman took the catch at backward point.

South Africa won the toss and elected to bat. South Africa are 1-0 up in the three-match series. While South Africa’s playing eleven remain unchanged, Bangladesh brought in Rubel Hossain in place of Jubair Hossain. 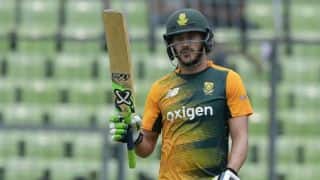