Catch the live telecast of the Bangladesh vs South Africa 2015, 1st Test on Gazi TV in Bangladesh.

African giants South Africa take on hosts Bangladesh on Day 3 of the first of the two-match Test series at the Zahur Ahmed Chowdhury Stadium in Chittagong on Thursday. Bangladesh, who have a dismal Test record, had made an impressive start to the match on the opening day on Tuesday against top-ranked South Africa. Pacer Mustafizur Rahman claimed 4-37 in his Test debut and leg-spinner Jubair Hossain added 3-53 as Bangladesh bowled out the Proteas for 248. The second match of the two-Test series will be held in Dhaka from July 30 to August 3. Imrul departed for 26 after leading the initial charge with three fours. Spinner Harmer later took out Mominul Haque’s off stump after he had scored to leave Bangladesh struggling at 55for 2, reports AFP. LIVE SCORECARD: Bangladesh vs South Africa, 1st Test at Chittagong, Day 3 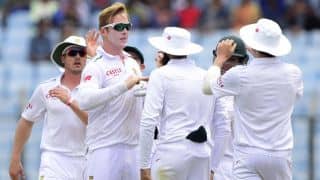