Catch the live streaming of the 2nd Test between Bangladesh and South Africa at Dhaka.

Bangladesh will start Day Two of the second and final  Test in a hope that they manage to post a score towards 300. They had a decent stand for the fourth wicket, their highest in Tests against South Africa but that was not enough as JP Duminy and Dale Steyn took 3 wickets each to keep them down to 246 for eight as the umpires called for stumps. Rain was predicted but it did not hamper proceedings much and more of the same will be hoped for both either teams after the first Test was marred by rain to a large extent. South Africa will want to get the last wicket and get batting on the slower deck at Dhaka. Live cricket updates: Bangladesh vs South Africa 2015, 2nd Test at Dhaka, Day 2 here. 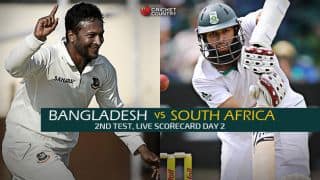