Catch the live cricket score of the first ODI match between Bangladesh and South Africa at Dhaka here.

After clinching the Twenty20 International (T20I) 2-0, South Africa face Bangladesh in the three-match ODI series, first of which will be played on Sunday at Dhaka. Hashim Amla will lead the side, in absence of AB de Villiers, who have been released from the squad after the birth of his first child. Bangladesh will be led by Mashrafe Mortaza, who led the side to two back-to-back ODI series wins against Pakistan and India. LIVE CRICKET UPDATES: Bangladesh vs South Africa 2015, 1st ODI at Dhaka

After their making it to the ICC Cricket World Cup 2015 quarter-finals for the first time in their history earlier this year, Bangladesh then trounced Pakistan 3-0 in April before following up with a 2-1 triumph over India last month. Although India’s consolation win marked the end of a record 10-match home winning streak, Bangladeshi opening batsman Tamim Iqbal said that confidence in the camp was high despite losing the T20Is to the Proteas. LIVE CRICKET SCORECARD: Bangladesh vs South Africa 2015, 1st ODI at Dhaka

“In the past year, the players have been reading ODIs much better and that’s the reason I am sure that we will get more success in this format,” Tamim told reporters ahead of the opening match at the Sher-e-Bangla National Stadium in Dhaka. “So as a unit we are obviously confident. You can’t lose all your confidence because of one or two defeats. When it comes to ODIs, we are a lot more confident unit and we will only grow in confidence,” he said. A victory would cement Bangladesh’s place in the eight-team ICC Champions Trophy in 2017 which would be another important milestone in the side’s development. LIVE CRICKET STREAMING: Bangladesh vs South Africa 2015, 1st ODI at Dhaka 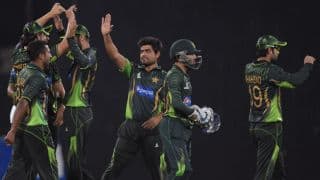