Bangladesh will face off against their visitors South Africa in the first Test of the two-match series at Chittagong starting July 21. The hosts won a closely-fought One-Day International (ODI) series, and will look to emerge victorious  even in the Tests. Bangladesh have been fantastic at home in recent times, having thrashed Zimbabwe in 2014, and then recording straight ODI series wins against Pakistan, India, and finally South Africa. Bangladesh are no longer pushovers, and have reached a point at which they command some respect in the international arena, and South Africa will know better than to take them lightly. The Proteas were without AB de Villiers and Dale Steyn, both of whom had opted out of the ODIs. Though de Villiers will not play the Tests either, Steyn will be back, and likely look for revenge after South Africa lost the ODIs in his absence. LIVE SCORECARD: Bangladesh vs South Africa, 1st Test at Chittagong, Day 1

Steyn is just four wickets short of 400 in Tests. He will become only the second South African after Shaun Pollock to get to the landmark if he manages to do so in this match. South African skipper Hashim Amla will hope that South Africa can overcome their ODI loss to emerge triumphant in the Tests. The side is a young one, with only Amla, Steyn, JP Duminy, Faf du Plessis, Morne Morkel, and Vernon Philander being the senior members of the side. On the other hand, Quinton de Kock, Kagiso Rabada, Dean Elgar, Reeza Hendricks, Simon Harmer, Dane Vilas, and Stiaan van Zyl are young and inexperienced. LIVE UPDATES: Bangladesh vs South Africa, 1st Test at Chittagong, Day 1 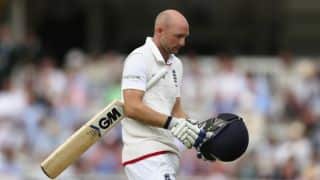