Earlier, South Africa got off to a great start, as they were in firm command at 104 for 1 by lunch. Stiaan van Zyl and Elgar started well for the visitors, putting on 58 for the first wicket. Van Zyl, playing in only his third Test, started in confident fashion, hitting as many as six boundaries in his 34 before unluckily feathering an edge down the leg side off Mahmudullah which was caught by Litton Das. Between Elgar and du Plessis, South Africa ensured they ended the first session firmly in control. LIVE UPDATES: Bangladesh vs South Africa, 1st Test at Chittagong, Day 2 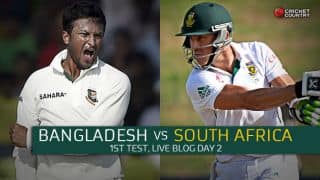