Rain washed out Day Four in the first Test between Bangladesh and South Africa on Friday.

African giants, South Africa face off against hosts Bangladesh on Day 5 of the first of the two-match test series at the Zahur Ahmed Chowdhury Stadium in Chittagong on Saturday. Rain washed out Day Four in the first Test between Bangladesh and South Africa on Friday. Match officials at the Zahur Ahmed Chowdhury Stadium in Chittagong called off play at 1:25pm (0725 GMT). South Africa, who made 248 in the first innings, bowled out Bangladesh for 326 and reached 61-0 in their second knock when bad light forced an early stumps with 24.5 overs left to be bowled on the third day. Openers Stiaan van Zyl and Dean Elgar were on 33 and 28 runs respectively, whittling down Bangladesh’s first innings lead to 17, reports AFP. LIVE SCORECARD: Bangladesh vs South Africa 2015, 1st Test at Chittagong

According to AFP, earlier, the start of play on Day Four was again delayed due to rain, with lunch being taken without a ball being bowled on the day. Openers van Zyl and Elgar were the two unbeaten batsmen overnight for South Africa, having added 61 for the first wicket without looking in any discomfort whatsoever. However, given the way the match has progressed, a flurry at wickets at any time is a possibility. Dale Steyn is one person who will be eagerly awaiting the start so that he can finally go on to complete his 400 Test wickets. He is currently on 399 Test wickets. LIVE UPDATES: Bangladesh vs South Africa 2015, 1st Test at Chittagong, Day 5 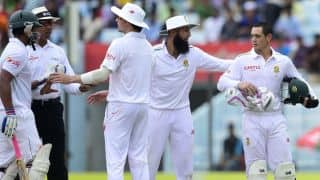 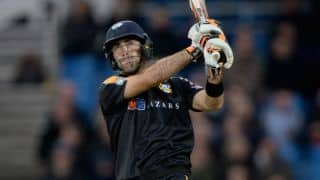 Glenn Maxwell dropped by Yorkshire due to disciplinary reasons