Catch the live cricket score of the second ODI match between Bangladesh and South Africa at Dhaka here.

The first ODI was reduced to a 40-over-a-side affair after monsoon downpour delayed the start of play for two hours and 40 minutes. Rabada became the second man in ODI history to claim a hat-trick on debut as he finished with 6 for 16, which is the best ever ODI haul by a debutant on a rain-soaked pitch. LIVE CRICKET SCORECARD: Bangladesh vs South Africa 2015, 2nd ODI at Dhaka

Du Plessis made an unbeaten 63 from 75 balls and put 99 runs with Rilee Rossouw in an unbroken third wicket stand after early dismissals of stand-in captain Hashim Amla (14) and Quinton de Kock (35). Rossouw, who was 45 not out, completed the win when he cut part-time leg-spinner Sabbir Rahman for a four towards point. LIVE CRICKET STREAMING: Bangladesh vs South Africa 2015, 2nd ODI at Dhaka 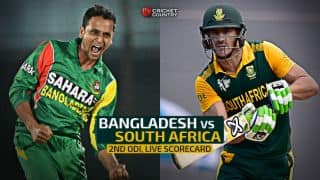