Catch the live scorecard for Bangladesh viewers for the second Twenty20 International (T20I) between Bangladesh and South Africa here.

Du Plessis helped the visitors recover from a shaky start with an unbeaten 79 off 61 balls, his sixth half-century in Twenty20 internationals, which included eight fours. Bangladesh started with spinners from both ends and reaped instant rewards when left-arm spinner Arafat Sunny dismissed AB de Villiers in the very first over for two. De Villiers opened the innings only the second time in his Twenty20 international career and conceded four dots before he picked up Mashrafee Mortaza at cover in the last ball of the over.  Live scorecard: Bangladesh vs South Africa, 2nd T20I at Dhaka

Quinton de Kock tried to break the shackle with a six off Nasir Hossain over cover but soon became a catch of debutante Litton Das off the same bowler at point for 12. Sunny returned for his second spell to break a 46-run third wicket partnership between Du Plessis and JP Duminy as Nasir took a well-judged catch at the deep to dismiss the latter for 18. Shakib Al Hasan trapped David Miller leg-before for one but Du Plessis added 58 runs in an unbroken fifth wicket stand with Rilee Rossouw (31 not out) to take South Africa to a respectable total. READ: Bangladesh vs South Africa 2nd T20I at Dhaka Preview 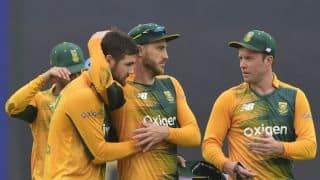 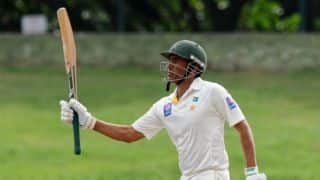