South Africa too have called in reinforcements in the form of AB de Villiers and JP Duminy.

Kimberley: The return of leading all-rounder Shakib Al Hasan provides encouragement for Bangladesh ahead of a three-match one-day international series against South Africa starting at the Diamond Oval tomorrow. But Bangladesh, outplayed in two Tests against the hosts, will have to contend with a South African team strengthened by the inclusion of AB de Villiers, one of the world’s most dazzling limited-overs batsmen.

Also back in international action for South Africa is JP Duminy, who retired from Test cricket after a run of low scores, but who remains a highly effective one-day player. In the most recent one-day outings for both teams, Bangladesh reached the semi-finals of the ICC Champions League in England in June, while South Africa failed to advance beyond the group stage.

Bangladesh were victorious in their two most recent one- day internationals against South Africa when they won a series at home in 2015. But the hosts will start strong favourites. South Africa have won 14 of 17 one-day matches against Bangladesh and triumphed in all six previous encounters in South Africa by convincing margins.

Bangladesh will be under new leadership with veteran bowler Mashrafe Mortaza captaining the side instead of Mushfiqur Rahim, who remains in the squad. Although Shakib’s return from a brief sabbatical will strengthen the tourists, they still rely mainly on the players who suffered two crushing Test defeats. Nor was there any encouragement for Bangladesh when they were convincingly beaten by an invitation team in a warm-up match in Bloemfontein on Thursday, despite Shakib top scoring for the tourists with 68.

For South Africa, the series is the first step on a road to the 2019 World Cup. Faf du Plessis has replaced De Villiers as the one-day captain and together with new coach Ottis Gibson will be seeking to build a squad capable of challenging for global honours. West Indian Gibson said the intention was to give opportunities over the next year to a large number of players, effectively serving notice to players currently in the squad that they need to perform to remain in the mix. 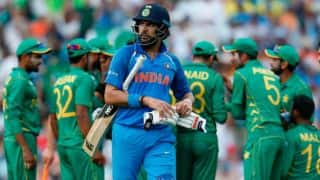