Bangladesh trail the two-Test series 0-1 after losing the series opener by 333 runs versus South Africa.

Bangladesh will miss out on the services of Tamim Iqbal in the second and final Test versus South Africa, from October 6 at Mangaung Oval, Bloemfontein. The left-hander is out of action after sustaining a thigh injury. Earlier, Tamim had walked out of the practice match against CSA’s Invitation XI in Benoni for the same reason. With Bangladesh 0-1 down ahead of the series decider, they will feel the heat to feature without Tamim. He is most likely to be replaced by Soumya Sarkar.

Tamim had scores of 39 and 0 in the first Test at Senwes Park, Potchefstroom. Being one of Bangladesh’s prolific batsman, his absence will hurt the camp severely. Also, this will be the first Test since 2013, against Sri Lanka, wherein Bangladesh will take on the field in the absence of all-rounder Shakib Al Hasan and Tamim. Shakib has taken a sabbatical to prolong his career after the home series versus Australia in August-September. 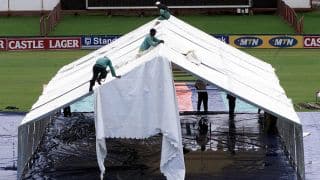