Dean Elgar ruled the roost with his 9th Test century on Day One of the first Test on a batting friendly Potchefstroom  pitch. Bangladesh had just one moment to cheer, that run-out of debutant Aiden Markram who was soaring towards his maiden Test century. However, Elgar teamed up with Hashim Amla and brought up yet another century-stand to keep South Africa on course. The live streaming of the match will be available on Sony LIV. The ball-by-ball updates can be enjoyed over CricketCountry Scorecard. With a score of 298 on board with loss of a wicket, a run-fest can be expected on Day 2 if Bangladesh bowlers do not show up.

Home captain Faf du Plessis could not hide his surprise after his Bangladesh opposite number Mushfiqur Rahim won the toss and asked the hosts to bat first. South Africa made full use of what may prove to be a misguided decision by Rahim. There was none of the early life that Rahim had hoped would assist his three seam bowlers. His only specialist spinner, Mehedi Hasan, was brought in as early as the sixth over. The pitch played easily all day, although the dry nature of the surface was shown by some balls which kept low. Bangladesh soon settled for defensive fields and they were able to keep the scoring rate under control.

None of the seamers looked threatening and Hasan ended up bowling 36 overs, including two with the second new ball, conceding 101 runs. Three part-time spinners shared another eight overs. Elgar and Markram were largely untroubled as they ticked off several milestones. Markram made 97 off 152 balls, with 13 fours, before there was a mix-up when both players were approaching their centuries in what proved to be the last over before tea.

Two balls later, Elgar reached his century off 176 deliveries. The closest a Bangladesh bowler came to taking a wicket was when part-timer Sabbir Rahman could not hold a ferocious straight drive from Amla when the batsman was on 40. 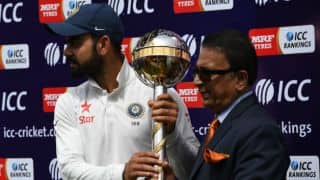 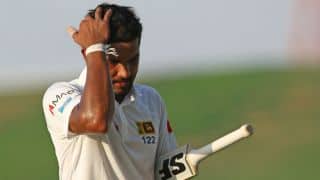