Bangladesh managed to keep their wickets intact in the second session of Day Two of the first Test against Sri Lanka, as they put up 31 runs.

Bangladesh managed to keep their wickets intact in the second session of Day Two of the first Test against Sri Lanka, as they put up 31 runs. Openers Soumya Sarkar and Tamim Iqbal batted well to put a price on their wicket as well as to score good runs on the board. Earlier in the session, they restricted Sri Lanka to 494 as they picked up 4 wickets in the session, ending the hosts innings at 494. At the crease are Tamim Iqbal (18) and Soumya Sarkar (15. Bangladesh trail Sri Lanka by 463 runs. Full Cricket Scorecard: Bangladesh vs Sri Lanka, 1st Test at Galle

Mehedi Hasan had removed the two set batsmen Kusal Mendis and Niroshan Dickwella in the first session, but Dilruwan Perera kept batting and scored a half-century in the second session batting alongside captain Rangana Herath. Herath could not add more than 14 runs, while Dilruwan added a run after reaching fifty. However, the hosts could not push the score to 500. Coming out to bat, Tamim and Soumya looked exceptionally confident. Both showed good footwork. While Tamim showed respect to good deliveries, he took full advantage of the loose ones, hammering them for boundaries which helped Bangladesh reduce pressure. Sarkar took the cue from Tamim and started hitting boundaries.

To Sri Lanka s credit, they produced a chance that was unfortunately put down. Suranga Lakmal managed to get an edge off Sarkar s bat, but Dilruwan dropped it. Another one was that of Tamim Iqbal which dropped short of short-cover. However, the wicket still looks good to bat on, and will give Bangladesh the chance to put up good competition. On the other hand, the four wickets in the previous session is an indication that effective bowling can give Sri Lanka the edge. All in all, good competition is on offer in the final session of the day. 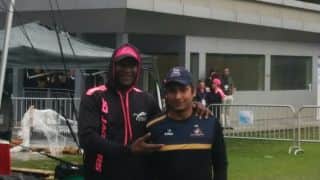