Sri Lanka won the opening Test against Bangladesh at Galle by 259 runs.

Sri Lanka won the opening Test against Bangladesh at Galle by 259 runs. The hosts were on top of their game, first gaining a massive lead of 456 runs after the third innings and later running through the Bangladesh line-up, not letting them build any big partnership to get the runs needed. Captain Rangana Herath emerged as the highest wicket-taker of the match with 9 wickets while Upul Tharanga and Kusal Mendis were the two most successful with the bat. This is Sri Lanka s 15th victory in 17 matches against Bangladesh and they maintain their unbeaten streak as well. Full Cricket Scorecard: Bangladesh vs Sri Lanka, 1st Test at Galle

Winning the toss, Sri Lanka opted to bat first and did full justice to the decision. Even after losing three of their top-order batsmen within 100 runs, the hosts revived to put up a total of 494 at the end of their innings. Kusal Mendis played the most crucial knock, scoring 194 runs while Asela Gunaratne (85), Niroshan Dickwella (75) and Dilruwan Perera (51) added their bit to push the score near 500. Subhashis Roy of Bangladesh impressed with his disciplined bowling, while Mehedi Hasan emerged as the highest wicket-taker of the innings with 4 wickets.

Tamim Iqbal (57) and Soumya Sarkar (71) took Bangladesh off to a perfect start, putting up a 118-run partnership. Tamim departed in a bizarre fashion, almost throwing his wicket to the Sri Lankans. Bangladesh started collapsing post the wicket and it was not until Mushfiqur Rahim (85) and Mehedi Hasan (41) took on the charges that Bangladesh put up some fight. The two put up a partnership of 106 runs and took their side to 298 for 7 from 192 for 6. Dilruwan and Herath were the pick of the bowlers, with 3 wickets each, running through the Bangladesh line-up and bundling them for 312.

With a 182-run lead in hand already, Sri Lanka batted again to increase it. It was Upul Tharanga who turned the hero for Sri Lanka in the third innings, scoring a commendable hundred. Sri Lanka s approach was aggressive once Tharanga completed his century and the batsmen started hammering. While Chandimal scored an unbeaten 50, Dilruwan s 27-ball 33 was a quick boost of runs that took the side to 274 for 6 before Herath declared the innings. It was a crucial innings for Chandimal who scored a half-century after eight innings as Sri Lanka set a target of 457 runs for Bangladesh to chase.

Bangladesh had a decent start once again, not losing a single wicket at stumps on Day Four. Sarkar scored his second half-century of the innings and looked in a destructive mode, as he hit 6 fours and a six. However, on Saturday morning, Bangladesh started collapsing. They lost 5 wickets in the first session of the day. The batsmen failed to stick to their plan and survive the spinners, especially Herath. Bangladesh were bundled out in the second session itself as Herath picked up 6 wickets in the innings. He got to the landmark of most number of fifers in the fourth innings (10) in the process.

The Test became memorable for Herath for more than one reason though, as he became the most successful left-arm spinner with 366 wickets in Tests. He went past Daniel Vettori to top the list. He also became the first Sri Lankan captain to win the first three Tests under his tenure. Apart from Herath, Dilruwan also displayed wise bowling. 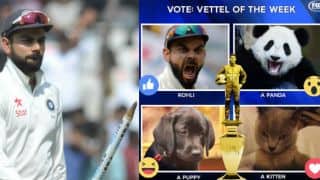 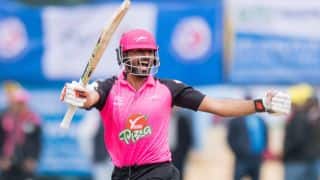