Dinesh Chandimal rode his luck to score an unbeaten half-century for Sri Lanka against Bangladesh at Colombo.

Dinesh Chandimal rode his luck to score an unbeaten half-century for Sri Lanka against Bangladesh at P Sara Oval, Colombo on Wednesday after the tourists made a dream start to their 100th Test. Sri Lanka reached 238 for 7 before bad light stopped the opening day s play. They recovered from 70 for 4 on a turning pitch, owing mainly to Chandimal’s patient 86 not out. Chandimal shared a 66-run stand with Dhananjaya de Silva before adding 44 and 43 runs with Niroshan Dickwella and captain Rangana Herath respectively, putting a halt to what had been a quick procession of wickets. Full Cricket Scorecard: Bangladesh vs Sri Lanka, 2nd Test at Colombo

Chandimal, who faced 210 balls and hit 4 fours in his knock, was given out leg-before on 38 off the bowling of Shakib Al Hasan. He reviewed immediately, and the decision was overturned. He then top-edged Taijul Islam to fine-leg on 46, but was given a benefit of the doubt by the third umpire as replays on whether Mehedi Hasan Miraz had caught him cleanly were inconclusive.

Coming into the side for Lahiru Kumara as Sri Lanka’s only change from their 259-run win in the first Test in Galle, Dhananjaya gave Chandimal good support before being bowled by Taijul for 34. Wicketkeeper Niroshan Dickwella chipped in with 34 after Dhananjaya s departure. Then Herath joined Chandimal in his effort to give Sri Lanka innings a decent look. Herath was unbeaten on 18 at close of play, and had his share of luck as he had an lbw decision overturned off Shakib. Chandimal plays lone hand as SL end Day 1 of 2nd Test vs BAN at 238 for 7

Asked to bowl by Herath, Bangladesh took the honours in the opening session when Mehedi struck twice and Mustafizur Rahman and Subashis Roy took one wicket apiece. Bangladesh, in their quest to draw level in the second match of the two-Test series, made four changes to the squad: wicketkeeper-batsman Liton Das was ruled out on the eve of the match with a rib fracture, allowing Mosaddek Hossain to earn his first Test cap; Mominul Haque, Mahmudullah and Taskin Ahmed were also dropped, making way for Imrul Kayes, Sabbir Rahman and Taijul.

What s in store on Day Two

As predicted, there were showers on Day One, resulting in early close of play. Day Two will hence see an early start. After sharing honours on Day One, both teams will look to grab advantage on Day Two. While Sri Lanka will hope Chandimal goes on to score a hundred and take the team past 300, Bangladesh will hope for an early end to the Lankan innings.

The track is expected to be good for batting for first two or three days, but it has something in it for the bowlers as well. Russell Arnold called it lot drier than what we re used to seeing here pitch, adding it has generally been a win-toss, bowl-first pitch at the pitch report. Kayes, who came after an injury layoff, was struck on his toe by Herath while fielding at short-leg. It is not a certainty whether he will bat or not. Bangladesh thus will need to bat sensibly for they might be a batsman short. 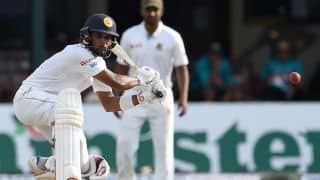 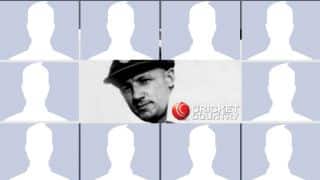 Problems of an All-Time Australian XI