Sri Lanka are struggling at 16 for three after five overs in the last league match of the Asia Cup at Mirpur on Thursday.

Given a target of 205, Sri Lanka started off on a disastrous note with Kusal Perera trying to go for a pull on the second ball of the innings and was out caught behind for a duck. Al-Amin Hossain got another wicket by removing Kumar Sangakkara for two.

Sangakkara got a ball which was moving away from him. But the elegant left-hander went for a drive and ended up edging it to the slips. Nasir Hossain in the slips fumbled but eventually held on to the catch. Sangakkara was out for two in five balls.

The flurry of wickets continuesd as out of form Mahela Jayawardene was stranded in the middle when Lahiru Thirimanne turned Jayawardene back in a tight single. An alert Mahmudullah threw it at the non-strikers end and Jayawardene was gone for a duck. 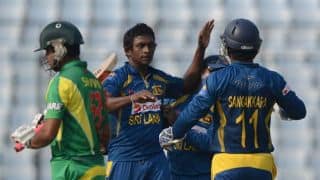