Bangladesh take on Sri Lanka in what looks like an exciting match at the iconic Melbourne Cricket Ground (MCG). Sri Lanka did not get off to the best of starts as they lost by a huge margin against co-hosts New Zealand on the opening day of the tournament. Sri Lanka were outplayed in every department in that match and as a result suffered a loss. Sri Lanka, however managed to get off the mark in their second match against Afghanistan, which they just about managed to win by four wickets, courtesy of a century by Mahela Jayawardene. Bangladesh vs Sri Lanka: Live Cricket Score Updates in ICC Cricket World Cup 2015

Bangladesh, on the other hand have had the best start to the ICC Cricket World Cup 2015. They thumped Afghanistan in the first match and due to bad weather, the match at Brisbane against Australia was abandoned, with both teams earning a point each. Courtesy of that solitary point, Bangladesh go into this match on three points, which is one point more than Sri Lanka’s tally of two points in two matches. ICC Cricket World Cup 2015: POINTS TABLE

Sri Lanka will not be totally happy with their performance so far in the ICC Cricket World Cup 2015, but they will hope to put up a better show against Bangladesh. Bangladesh haven’t really been tested in the tournament so far and Sri Lanka will give them a run for their money throughout the game. ICC Cricket World Cup 2015: SCHEDULE & MATCH DETAILS

Catch all the action live and exclusive on Star Sports 1, and Star Sports HD1. Also catch the live streaming of the match on the go by just logging on to starsports.com. ICC Cricket World Cup 2015: Complete Coverage

Live Streaming is slowly but steadily catching up in terms of both requirement and demand with fans of cricket throughout the world. Live Streaming comes in handy to cricket lovers who are unable to access television to watch the cricket match and solely depend on the internet and live streaming to watch the sports they love. Catch the live cricket score of the match here

Many websites and portals show Live Streaming on their websites, but these are usually not entirely reliable. Some such pages may take the users to some nefarious pages and frustrate the user. Live Streaming can be accessed even on hand-held devices where one can follow live updates, and even ball-by-ball commentary of the latest score from any part of the world via live streaming. READ: Five reasons why Bangladesh can beat Sri Lanka 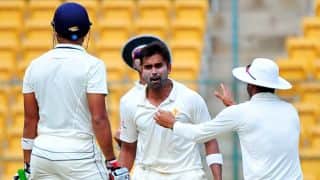