Shadman Islam made his Test debut while Liton Das returned to take the place of the injured Mushfiqur Rahim.

Seeking to match their best year in Test cricket – 2014, when they won three matches – and wrap up the series 2-0, Bangladesh made the bold call to drop Mustafizur Rahman and play an all-spin attack against West Indies in the second Test at Mirpur.

This is the first time in Bangladesh’s Test history that they have fielded only spinners in their bowling lineup. Shakib Al Hasan won the toss on Friday and opted to bat, while revealing that Mustafizur had been benched as the team put faith in the trio of Taijul Islam, Mehidy Hasan Miraz, Nayeem Hasan and the skipper, with Mahmudullah the fourth spin option.

With Imrul Kayes out of the second Test with a shoulder injury, the 23-year-old Shadman Islam made his debut as opening partner to Soumya Sarkar. Mushfiqur Rahim bruised a finger during indoor training on Wednesday and ruled out on match morning, with the recalled wicketkeeper-batsman Liton Das returning to the lineup after he last played the recent Zimbabwe series.

West Indies are without Shannon Gabriel, who was handed a one-match suspension by the ICC during the Chittagong game, and brought in Shermon Lewis.

The Shere Bangladesh Stadium at Mirpur on the outskirts of Dhaka is where Banglades have claimed their two biggest Test victories: against England and Australia all in the past two seasons. 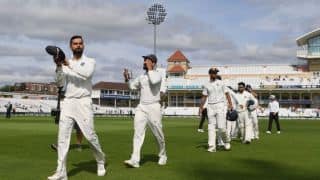