Bangladesh and Zimbabwe have the opportunity to gain vital rankings points.

In their three-match Test series, the hosts Bangladesh thrashed Zimbabwe by 186 runs in the third and final Test in Chittagong on last Sunday to sweep the series 3-0. The tourists, set a tough winning target of 449, were bowled out for 262 in their second innings just before tea on the fifth day in the port city, AFP reported.

Bangladesh and Zimbabwe have the opportunity to gain vital rankings points when they go head-to-head in a five-match One-Day International (ODI) series starting on Friday at Chittagong. Ninth-placed Bangladesh (69) currently hold an 11-point lead over the Elton Chigumbura-led side in the International Cricket Council (ICC) team rankings and can further increase their lead while also reducing the gap with New Zealand and the West Indies, both level on 96 points, according to an ICC release Thursday.

If Bangladesh manage a whitewash, they will open up a 22-point gap over Zimbabwe, while a 4-1 victory would lead to a gap of 17 points. A 3-2 series win would see the hosts retain a nine-point advantage. 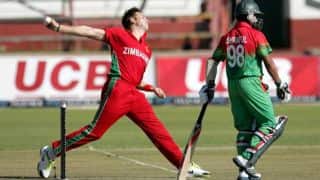