Bangladesh reached to 165 for two at the end of 35 overs of play in the second One-Day International (ODI) played against Zimbabwe at Chittagong on Sunday. Tamim Iqbal and Anamul Haque both reached their half-centuries after a slow start. Bangladesh took the power-play in the 28th over of the match and then started the acceleration. But Tamim fell on the last ball of the power-play while Shakib Al Hasan who came to bat at No. 3 was out on the first ball he played.

Earlier, Zimbabwe bowlers did well to keep the Bangladeshi batsmen quiet. The run-rate was close to four. It was a bit of rusty play from Bangladesh openers as they didn’t rotate the strike and relied on occasional boundaries for runs.

Kamungozi, the leg-spinner was introduced in the ninth over of the match.  Panyangara and Chatara opened the bowling for Zimbabwe. There were three boundaries struck in the first five overs- two by Anamul Haque and one by Tamim Iqbal.

Earlier, Bangladesh won the toss and opted to bat first. The match was was started a bit early due to the due factor. Both teams fielded an unchanged squad for this ODI. Bangladesh are already 1-0 up in the five-match ODI series. Bangladesh also won the Test series 3-0. 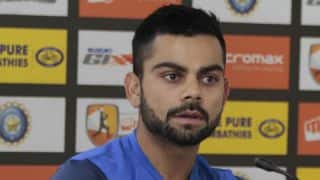 Australia vs South Africa 2014: Target revised to 275 from 48 overs due to rain interruption