Bangladesh scored a tense three-wicket win over Zimbabwe in the first Test on Monday.

Zimbabwe captain Brendan Taylor on attributed the defeat to Bangladesh by three wickets in the opening Test match to bad batting. Taijul Islam shone with bat and ball as Bangladesh scored a tense three-wicket win over Zimbabwe in the first Test on Monday to grab the lead in the three-match series.

“All credit to Bangladesh but we were mentally weak with the bat,” the Zimbabwean captain said. “We can’t win Tests if we bat like this.

“At least the bowlers showed a lot of character. You have to have the mindset that you can win from any situation. We started well and had them three down but put down a few chances. We need to make big scores because these 20s and 30s don’t help. But I am sure we will come back stronger in the next Test,” Taylor added.

The 22-year-old left-arm spinner, Taijul,  became the first Bangladesh bowler to claim eight wickets in an innings, his figures of 8-39 helping to skittle Zimbabwe for 114 in the second innings.

Set a modest target of 101, Bangladesh slipped to 0-3 before Taijul, coming in at 82-7, guided his team home with an unbeaten 15 amid mounting tension on the third day at the Sher-e-Bangla stadium in Dhaka.

Taijul, who put on an unbroken stand of 19 with skipper Mushfiqur Rahim (23 not out), was named the man of the match in only his third Test appearance. 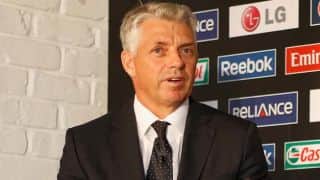