By lunch, Mohammad Mithun and Mahmudullah had revived Bangladesh from 25/4 to a lead of 296.

Kyle Jarvis and Donald Tiripano grabbed two wickets each to set back Bangladesh on the fourth morning of the second Test at Mirpur, giving Zimbabwe some much-needed lift as they faced a huge first-innings deficit.

By lunch, however, Mohammad Mithun and Mahmudullah had revived the hosts from 25/4 to a lead of 296.

Having bowled out Zimbabwe for 304 at the close on Tuesday, Bangladesh would have fancied going for quick runs on the fourth morning. Imrul Kayes was the first to go, slashing a wide ball from Jarvis  to the fielder station at deep backward point in the fifth over of the day. Two balls later, Jarvis slanted one past Liton Das to hit off stump and Bangladesh were 10/2.

A third wicket fell without a run added as Mominul Haque chased one from Tiripano and edged to Regis Chakabva, and when Mushfiqur Rahim swatted the same bowler to deep square leg, Bangladesh were four down in 12.1 overs.

Mithun and Mahmudullah were not as reckless and bedded down into the lunch break. 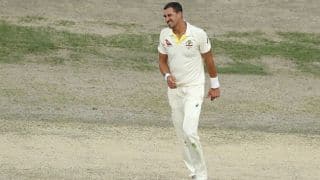 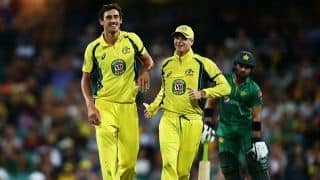