Bangladesh s defeat in the first Test surely came as a shock to many, and now, a website from the country has blamed the curator of the Basin Reserve, Wellington for the defeat.

Bangladesh s defeat in the first Test surely came as a shock to many, and now, a website from the country has blamed the curator of the Basin Reserve, Wellington for the defeat. Bangladesh lost the match even after putting up a massive 595 for 8 declared in the first innings, and New Zealand performed exceptionally with the bat as well when their turn arrived. Despite a double-hundred from Shakib Al Hasan and a brilliant 159 from Mushfiqur Rahim, Bangladesh went on to lose the match by 7 wickets, courtesy Tom Latham and skipper Kane Williamson s efforts with the bat. Bangladesh will face New Zealand in the final match of the tour starting Friday.

Bangladesh website khela-dhula.com reported that on Day Four of the Wellington Test, the pitch curator illegally watered the reserve pitch beside the playing pitch. They also accused New Zealand coach Mike Hesson of instructing the curator for doing so as he was seen talking to the curator minutes before the incident took place. They also reported that a video footage of the same was recorded by Bangladesh coach Chandika Hathurasingha and it shows that the incident took place in front of the reserve umpire of the stadium.

According to the report, the incident was brought to knowledge of match referee Javagal Srinath, who said this was not a right thing to do and later sought apology to Hathurasingha the next morning.

Watering the reserve pitch is illegal according to ICC rules as the playing pitch soaks up the moisture and provides help to the pacers. The website accused New Zealand of stopping the Bangladesh batsmen from scoring runs in the second innings in this manner. However, on the same pitch, Williamson scored a quickfire 104 that sealed the match for the hosts. 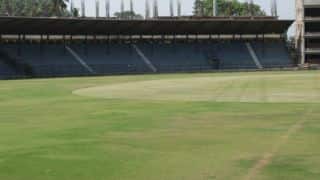