The 33-year-old cricketer in a post on Facebook denied inaugurating the puja pandal. He said it was inaugurated by Kolkata mayor Firhad Hakim. 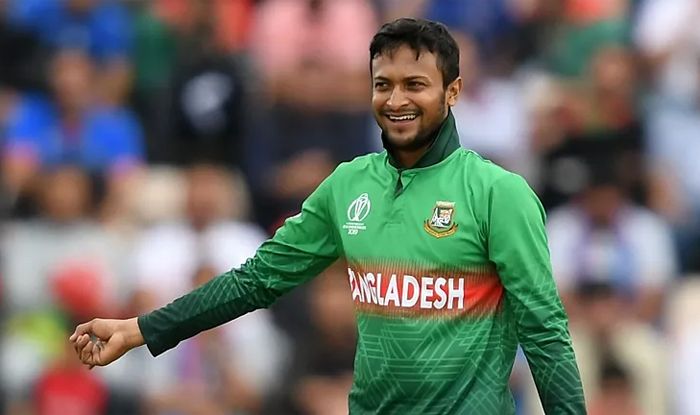 Bangladesh police on Tuesday arrested a man who allegedly issued death threats to cricket all-rounder Shakib Al Hasan for inaugurating a Kali puja pandal in Kolkata, even as the cricketer issued an apology and said he only joined the function briefly. A joint team of the elite anti-crime Rapid Action Battalion (RAB) and police arrested 28-year-old Mohsin Talukdar from southeastern Sunamganj district after 24 hours of a massive manhunt.

“He is now in our custody awaiting subsequent legal procedures,” a police officer familiar with the development told PTI.

After the cricketer’s picture at the program in Kolkata’s Amra Sobai Club went viral, Talukdar went live on Facebook on Sunday night carrying a large machete in his hand and threatened to kill Shakib, saying he hurt his religious sentiments by inaugurating the Puja event in the West Bengal’s capital city.

By early morning, Talukdar, however, withdrew the threat and apologized in another live video on social media and then went into hiding. He was later traced in neighbouring Sunamganj district. His wife was previously detained for questioning.

The 33-year-old cricketer in a post on Facebook denied inaugurating the puja pandal. He said it was inaugurated by Kolkata mayor Firhad Hakim.

“Media, social media everywhere it was flooded that I went to Kolkata to inaugurate a puja ceremony which actually was not the reason behind my visit and I did not inaugurate puja.

“The puja was inaugurated by Firhad Hakim, mayor of Kolkata. In my invitation card it was clearly mentioned that I was not the chief guest for puja,” he said in the post on Monday.

Shakib said since he played for Kolkata Knight Riders for a few years, “people there know and love me and the stage, where my programme took place, was next to puja pandal but no religious issues were discussed.”

“While I was going back to the car, I had to go through the pandal because all other exits were blocked. There I stopped for a few seconds and as the crowd and organizers requested, I lit a candle which now I feel that I have done wrong,” he said.

The cricket star, however, also issued an apology, saying he is a “practicing Muslim and always tried to follow the religious customs (and) please forgive me if I have done anything wrong”.

Shakib went to Kolkata last Thursday for business purposes and was then pictured at a Kali Puja festival in Kolkata’s Kakurgachi area.

According to media reports, Trinamool Congress MLA Paresh Paul, who was the main organizer of the Kali Puja stage in Kolkata, said Shakib did not inaugurate any puja pandal at all and he just got up on the stage, addressed the audience, and lit candles.

Kolkata’s Amra Sobai Club has been hosting the Kali Puja for the past seven years.