Banned Mervyn Westfield gets before time return for lower-level matches

Banned Mervyn Westfield gets before time return for lower-level matches

But part of his ban has been relaxed by England's Cricket Discipline Commission (CDC) in an acknowledgement of the now 27-year-old Westfield's involvement in anti-corruption programmes.

Former  Essex bowler Mervyn Westfield has been cleared to return to English reserve level and minor counties cricket a year ahead of schedule after serving a ban for corruption, it was announced Thursday. The pace bowler was banned from all cricket for five years and sentenced to four months in prison after pleading guilty to a spot-fixing offence in a 2009 one-day fixture against Durham, an incident which later led to a life ban for former Essex and Pakistan leg-spinner Danish Kaneria. Westfield’s suspension runs until February 16, 2017 and he cannot play first-class cricket until that date.

But part of his ban has been relaxed by England’s Cricket Discipline Commission (CDC) in an acknowledgement of the now 27-year-old Westfield’s involvement in anti-corruption programmes.

“The Cricket Discipline Commission today announced that the former Essex cricketer Mervyn Westfield will be allowed to play minor counties and first class second XI cricket from the start of this season,” said a statement.

Kaneria was later given a global life ban from cricket after being found guilty of enticing Westfield into spot-fixing — a process whereby specific incidents in a match, rather than the result itself, are fixed for underhand financial gain.

Westfield was allowed to return to club cricket two years ago and has played for the Frinton-on-Sea team in Essex for the last two seasons. He has also spoken to young players at England’s Professional Cricketers Association’s pre-season rookie camp and at a recent event in South Africa which tried to educate cricketers on the threat of corruption. “I’m really happy to play minor counties and second XI again — if anyone gives me the opportunity to do it,” Westfield told BBC Sport on Thursday.

“I’ve done wrong. I’m just trying to fix it now and obviously I’m happy I’m back playing cricket,” added Westfield, who has been working as a scaffolder.

“Of all the players who’ve fallen foul of the anti-corruption rules in recent years, Mervyn’s done more to try to redeem himself than anybody…Without doubt he’s played a massive part in education in England.”

Whether Westfield will ever be given a first-class county contract again remains open to question and the CDC said he must continue to serve the rest of his five-year ban from such matches because “strong deterrent sentences continue to play an important role in the wider fight against corruption in cricket”.

Nevertheless, CDC chairman Gerard Elias said: “The panel concluded that Mr Westfield has made a real and substantial effort in this area which reflects his continuing remorse and a genuine desire on his part to repay cricket for the harm caused by his actions in 2009.

“In these exceptional circumstances, we shall allow him to participate in minor counties cricket and first-class county second XI cricket from February 17th, 2016.

“However, he will not be able to participate in first-team cricket for any first-class county until his original sentence expires on February 16th, 2017.” 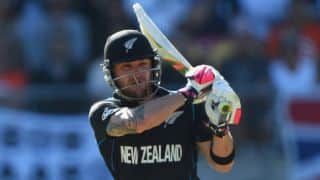