Guyana needed 46 from 25 balls before the final downpour ended the game.

Barbados Tridents won the second edition of the Caribbean Premier League (CPL) through Duckworth/Lewis method after a heavy downpour, which dampened the carnival atmosphere at St Kitts in the final to leave Guyana Amazon Warriors high and dry in what promised to be an enthralling finish to the competition. Guyana were eight runs short of the target that was required at the time and kie got to lift the coveted trophy that had won audiences hearts and entertained in a manner only Caribbean cricket can through the month.

Guyana captain Denesh Ramdin had won the toss and elected to send his opponents to bat first. Krishmar Santokie’s wily medium-pacers had reduced Barbados to 8/2 in the third over before the Dwayne Smith show brought the crowd on their feet. Smith started rather slowly and with the help of an experienced aide in the form of Shoaib Malik, resurrected the innings. The Barbados opener picked his targets in Guyana attack and went on rampage, striking his characteristic clean hits out of the park. Sunil Narine then had his own say in the scheme of things. Poor concentration from Smith and Pollard meant that Guyana clawed back into the contest with back-to-back wickets. Malik, however was solid and went for the occasional slog. With a decent last few overs, Barbados got to a fighting 152.

Pollard’s use of his bowlers was excellent and stifled the powerful Guyana batting line up with sustained pressure. Lendl Simmons and Martin Guptill were made to look like batsmen desperately searching for form than the marauders who walloped Jamaica Tallawahs a day ago. Barbados’ frontline bowlers Kyle Mayers, Jason Holder and CPL 2014’s highest wicket-taker, Ravi Rampaul were all on target and gave nothing away in Guyana’s pursuit.

Mohammad Hafeez and Jimmy Neesham went steadily but departed in quick succession with the required run-rate mounting to 11. Skipper Ramdin and  Christopher Barnwell hit a few lusty blows and just when things looked like heading for a last over finish, a fourth and a final rain delay pulled down curtains on the final. Guyana needed 46 from 25 balls before the final rain delay. While it is impossible to say how the match would have panned out had there been an uninterrupted contest, Barbados can be proud of their team effort throughout the competition with each player in the eleven bailing their team out at different junctures in the competition. India vs England 5th Test at The Oval: England’s domination, India’s sloppiness and other highlights from Day 2 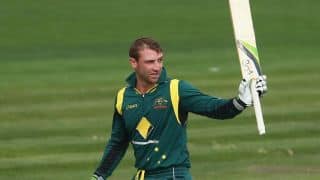