Two of the giant sides in the tournament Barisal Bulls and Chittagong Vikings go head to head in Match 3 of the ongoing Bangladesh Premier League (BPL) 2016, at the Shere Bangla National Stadium in Mirpur, Dhaka on Friday, as the live cricket streaming of the match is available on Sony LIV, while the live telecast of the match is available on Sony SIX and Sony SIX HD. The streaming is also available on channelninebd.tv in Bangladesh, while the live telecast is available on Channel Nine in the nation. The opening couple of games on Friday were washed out as a result of rain, and similar threat possesses on Saturday as well. Bangladesh Premier League (BPL) 2016: Points Table and Team Standings

Bangladesh Premier League (BPL) 2016 is all set to unfold itself upon the cricketing world. BPL is currently into the fourth season after the inugral season in 2012. The 2016 BPL season will consists of seven franchises, which will for the first time include 2- new teams in Khulna Titans and Rajshahi Kings, alongside Dhaka Dynamites, Comilla Victorians, Chittagong Vikings and Barisal Bulls. The tournament will take place from Novemeber 4 till December 10. Dynamites will be captained by Kumar Sangakkara, while defending champions Comilla Victorians will again be lead by Mashrafe Mortaza. Chittagong Vikins will be skippered by Tamim Iqbal, while Barisal Bulls will be led by Bangladesh Test skipper Mushfiqur Rahim. 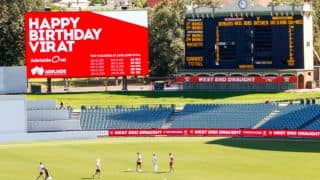