Travelling English supporters hugely outnumbered local Sri Lankan fans at the start of the first Test in Galle, making it look like a home match for the tourists. 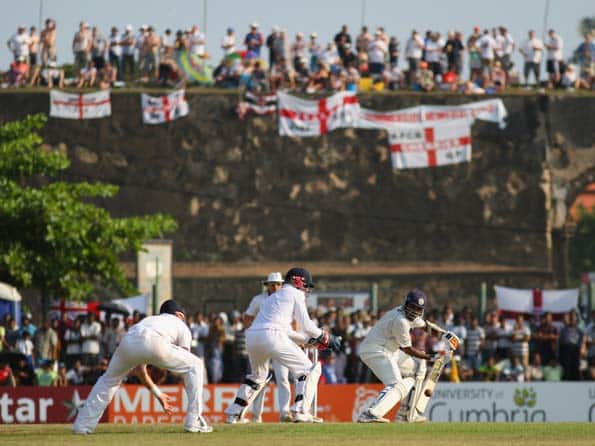 An estimated 8,500 English tourists packed the Galle International Stadium which has a current capacity of just 9,000 spectators Getty Images

Travelling English supporters hugely outnumbered local Sri Lankan fans at the start of the first Test in Galle, making it look like a home match for the tourists.

An estimated 8,500 English tourists, many of them members of the famous “Barmy Army” of diehard supporters, packed the Galle International Stadium which has a current capacity of just 9,000 spectators.

Local fans chose to stay away after the cash-strapped Sri Lanka Cricket (SLC) adopted a 10-fold increase in ticket prices for the two-Test series.

Daily tickets were priced at 5,000 and 7,500 Sri Lankan rupees ($39 and $58), compared to the 500 rupees charged for the previous home series against Australia last year.

If the match lasts all five days, it could cost a fan at least 25,000 rupees — the monthly salary of a low-level government official in Sri Lanka.

“It is too expensive,” said Galle shopkeeper Dhaminda Wijesuriya, who preferred to watch the game on television. “I think they want England to feel at home at our expense.”

English fans were also angered by the rise in entry prices, but media speculation that many of them would boycott the Test in protest proved unfounded.

“I am not sure it makes sense to make tickets so expensive, but it would have made even lesser sense to stay away from the match after coming all the way from England for it,” said Ray Evans, a cricket supporter on his third visit to Sri Lanka.

“We want to enjoy the cricket and make the boys feel if they were playing at home.”

Some English tourists who could not secure tickets for the game watched play from the vantage point of the historic 17th-century Dutch fort which overlooks the stadium.

SLC officials said the rise in prices was due to higher demand for tickets.

“Yes, there is a substantial increase from previous tours and the 2011 World Cup, but it’s the same for everyone,” SLC secretary Nishantha Ranatunga said.

“We need to develop the game of cricket in Sri Lanka so, whenever there is an opportunity and a demand for tickets, it is our policy to put prices up.”

The SLC ran up debts of reportedly $69 million after it built two new stadiums in Hambantota and Pallekele, and renovated the Premadasa Stadium in Colombo, for the World Cup last year co-hosted with India and Bangladesh. (AFP)