Batting 4 Life T20 match was organized under the aegis of the recently formed political-coalition— Political Leaders Coalition for Child and Adolescent Health.

New Delhi: Members of Parliament and journalists faced off at the third edition of “Batting 4 Life” Twenty20 cricket match, dedicated to raising awareness around preventable childhood diseases such as pneumonia and diarrhoea. Organized under the aegis of the recently formed political-coalition Political Leaders Coalition for Child and Adolescent Health (PLCCAH), the event is one of the first steps of the Trust to bring together parliamentarians and journalists to create a positive environment and providing policy direction for addressing issues related to child and adolescent health and raise awareness around cost saving methods of preventing them, such as through immunization. READ: England MPs to play charity match in England

The team of parliamentarians registered their first win against the journalists at Batting 4 Life, by defeating the media 82 runs. Played on a chilly December morning, the game was graced with the presence of Shri Arun Jaitley, Union Finance Minister; he was joined by his cabinet colleague and Union Minister for Science, Technology and Earth Sciences Dr. Harsh Vardhan.

Talking about the need for collective effort of parliamentarians, media and the public at large to pledge their support to work in the interest of a healthy India, Arun Jaitley, Union Minister of Finance said, “This is a great initiative in preventive healthcare to increase consciousness in society, to educate people, to make them aware and you’ve chosen to integrate a popular sport, cricket as an instrument of creating awareness in this regard. Two of the noisiest communities of India – journalists and politicians – are playing with each other today so that the actual loud voices that are needed in support of health programme reach the right places.”

“The journalists normally have won, but this year the MPs seem to have started off well. But never underestimate the Indian media. It can always do better than the politicians”, Jaitley said on a lighter note. Meanwhile, Dr Harsh Vardhan said, “This is a very welcome move, it is certainly very inspirational. It focuses attention on one of the very prime issues in the country that is, the rights of children and focusing on their health & education. Our country badly needs the attention of the whole society and not just the administration, to make sure that child’s rights are protected. Occasions like this help generate good awakening in the society.”

“It is things like these that takes us closer to perfection. Polio eradication in Delhi began with a similar event in 1994 – a cricket match between the media and the MLAs. Anything that strengthens the health movement in the country, ensures that health becomes a social movement, promotes rights of children, and draws attention of the society towards child rights is a welcome move,” he added.

As per a recently released report by John Hopkins Bloomberg School of Public Health, India tops a list of 15 countries with the highest burden of child deaths due to pneumonia and diarrhoea. While the Indian government has shown commitment to immunize every child in the next five years, the slow rollout of pentavalent vaccine in high-burden states and low Hib vaccine coverage nationally, coupled with the low levels of access to appropriate pneumonia and diarrhoea treatments are being pegged as the biggest challenges to lowering mortality rates. 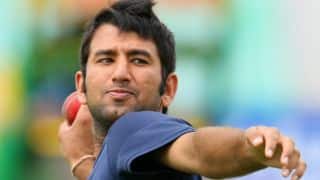