New Zealand opted to bowl first and India were reduced to 122/5 by the time tea-break was taken and then rain washed out the entire third session's play. Mayank Agarwal reckons tricky conditions on the opening day of the first Test in Wellington made the job of Indian batsmen quite difficult against New Zealand bowlers on Friday.

New Zealand opted to bowl first and India were reduced to 122/5 by the time tea-break was taken and then rain washed out the entire third session’s play.

“I think it is quite tricky since the wind blows at more than a decent speed here,” Agarwal, one of the two Indian batters who crossed 35 said after the day’s play was called off. “And you just have to make adjustments right there on the field. As a batsman, it’s not easy, especially first day, on this track. As a batsman, you never felt that you were completely in because even after lunch, it was doing a little bit.”

Debutant Kyle Jamieson made a memorable start to his Test career with the scalps of Prithvi Shaw, India captain Virat Kohli and Cheteshwar Pujara to finish the day with figures of 3/38 from 14 overs.

Agarwal praised Jamieson saying his ability to generate bounce made the life difficult for the tourists. “I thought he (Jamieson) bowled exceedingly well,” Agarwal said. “He hit good areas and he got good bounce. The way he used the new ball was fantastic and he kept testing us bowling in the right areas.

He added, “Since the wicket was soft, he was getting extra kick as well. As a batsman, you have to make that little extra adjustment to the bounce, which can be a little tricky.

Agarwal, who saw through the opening session, fell right after the start of the second session. It came after he remained off the strike for some time but he dismissed any notion of his dismissal resulting from a lapse in concentration. “I don’t really think about all of those things while I am batting. If you are playing well and if you are addressing the ball well, it’s fine. It really doesn’t matter, especially in these conditions. It’s alright to be at the non-striker’s end,” he said.

It seemed India batsmen had difficulty dealing with fuller deliveries. Four out of five wickets to have fallen on the day were to full deliveries but Agarwal feels otherwise. “No, it’s not like only the fuller deliveries will be effective. If you keep pitching it up, it becomes easier for the batsmen. You have to mix up your areas but you still have to be consistent that you attack at the right time,” he said.

“In an over, you can’t attack with all six deliveries. Bowl three to four balls in good areas and then if you feel that you can get the batsman out, then you attack,” he added.

Ajinkya Rahane (38*) and Rishabh Pant (10*) are the two unbeaten batsmen and Agarwal, who scored 34 off 84, is hopeful he duo will take India to a big total. “To be honest, as many runs that we can make and as long as we can bat, it will be good for us,” Agarwal said of his team’s plan. “The way Ajinkya is batting is very good (for us). He is looking solid and I really hope that him and Rishabh can get a big partnership and take us to a big score.” 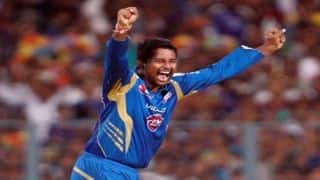