Christchurch: New Zealand‘s one-day batting frailties have been brutally exposed by England 15 months out from the next World Cup, causing deep concern for coach Mike Hesson. Three years on from being finalists in the 2015 World Cup, where they lost to Australia in Melbourne, New Zealand are now struggling to get an innings underway as they build towards the next showpiece in May 2019.

England’s 3-2 victory in the just-completed ODI series in New Zealand may suggest a close fought battle, but two of England’s wins were by runaway margins including Saturday’s series decider. New Zealand’s meagre 223 all out at Hagley Oval in Christchurch was easily overhauled by England with seven wickets remaining and 104 balls to spare.

“Our top order hasn’t set the platform, that’s pretty clear,” Hesson acknowledged on Sunday as he reviewed the ruthless way the tourists wrapped up the series. New Zealand, sent into bat, stumbled to 93 for six as the top order fell with an all-too-familiar regularity before Henry Nicholls and Mitch Santner put some steel in the innings with an 84-run stand.

In the fourth ODI, New Zealand were two for two before Ross Taylor saved the day with his unbeaten 181. The best and longest stand by openers Martin Guptill and Colin Munro was 12 off 13 deliveries in the third ODI.

By comparison, England progressively improved their opening partnerships from 10 to 15, 25, 77 and then 155 in the decider.

In all five ODI innings against England, New Zealand had to rely on a handful of individual performances to get them through with two centuries by Taylor, one from Kane Williamson and an impressive total of 216 runs by number eight batsman Santner.

“I think, certainly, as a batting unit we didn’t really fire in terms of the balance we wanted to put out there,” Hesson said.

“We didn’t allow ourselves to use the power we have at the back end, so that’s certainly something we’re going to have to look at. Throughout this series, there were some very good one-off performances, but it probably overshadowed a batting line-up that hasn’t quite fired.”

Hesson said the players in the New Zealand squad deserved to be there “based on previous performances” but did not fire when it mattered.

“We went in with a batting-heavy line-up and it’d be fair to say we never got ourselves in a position to utilise that,” he said. They do not play another ODI until Pakistan late in the year, with Hesson noting there was “plenty of thinking to be done” before then.

Captain Williamson said New Zealand definitely missed the injured Taylor in the final ODI against England but the star’s absence did not excuse the overall batting failure on a good surface. “The disappointing thing was too many soft dismissals through that middle order,” Williamson said. “There were definite decision-making errors on our part.” 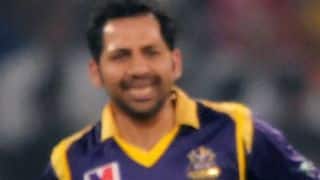