Brendon McCullum and Chris Lynn put on a dazzling show to fire Brisbane Heat to a record 101-run win against Melbourne Renegades in a Big Bash League match on Sunday.

Brendon McCullum and Chris Lynn put on a dazzling show to fire Brisbane Heat to a record 101-run win against Melbourne Renegades in a Big Bash League match on Sunday.

Chasing 193, Renegades were skittled for 91 in 17.5 overs at the Geelong Cricket Ground with Heat winning recording the second biggest victory (by runs) in BBL history.

After teenaged opener Max Bryant blasted 44 off 24, McCullum combined with Lynn for an 89-run stand as both went on to hit quick fifties.

After being asked to bat, Heat got off to a blazing start, led by Bryant who took them to 65/0 in five overs. Daniel Christian put an end to his assault right after the Powerplay. He struck eight fours during his stay.

However, there was no respite for the Renegades as the duo of McCullum and Lynn, known as ‘Bash Brothers’, extended the pummelling. McCullum clattered four fours and five sixes for a 43-ball 69. He holed out off Harry Gurney in the death overs.

Lynn though remained unbeaten, hitting 66 off 44 with three fours and four sixes as Heat posted a huge 192/4. Christian and Gurney took a couple of wickets each for the Renegades.

Brendan Doggett (3/16) and Josh Lalor (2/12) landed early to push Renegades on the backfoot. They lost three wickets for 29 runs in the Powerplay overs.

They failed to jot together a decent partnership as Heat continued to hit them regularly. Mitchell Swepson also claimed three scalps while Mujeb Ur Rahman and Ben Cutting chipped in with a wicket each. Tail-ender Cameron Boyce struck a four and two sixes and was the last man to be dismissed, recording his team’s top score 25 off 21. 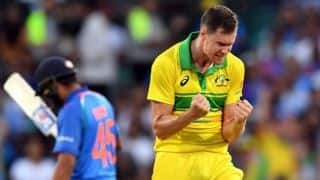