Thursday's game in Brisbane was called off after the lights went out in parts of the ground.

The Sydney Thunder general manager Lee Germon has filed a written complaint with Cricket Australia (CA) Friday after after farcical scenes in Australia s Big Bash League when a game was abandoned at the Gabba after a floodlight failure.

Thursday’s BBL fixture between Brisbane Heat and Sydney Thunder was called off after the lights went out in parts of the ground, leaving players and fans fuming and Thunder coach Shane Bond urging the tournament organisers to review the rules.

CA responded swiftly to investigate the reasons for the floodlight failure with hardly a week to go for the day-night Test between Australia and Sri Lanka, stating that ticket-holders from the abandoned fixture complimentary tickets to attend next week s day-night Test.

Germon, in his letter to CA, wrote: “We believe that the venue has the responsibility to provide floodlighting for the match, including the provision of a back-up power source. We have therefore asked Cricket Australia to award Sydney Thunder the two points for a win.”

Speaking to the Sydney Morning Herald, the former New Zealand cricketer said: “There should be a back-up system that enables play to carry on. In my view, this is similar to a situation where matches have been abandoned due to the pitch not playing a way umpires think it should be played, and in those previous situations points have been given to the away team.”

Earlier in the season, when the Thunder met the Heat in Sydney, the home team batted for three overs in hard rain in order to get a result. The Heat won that match on the D/L method, which left Germon quizzical about the response to Thursday’s decision.

“The thing for me that I’m struggling with is that we had 26,000 people in the stadium,” he said. “Big Bash goes to great extremes to always provide entertainment, and we saw that when we played through three overs of pouring rain at Spotless Stadium a couple of weeks ago against the same opposition. It was deemed safe then, so I can’t understand why it would not be deemed safe here when the lights were partially on. It’s unacceptable this has happened.”
First Published on
Last updated on January 18, 2019 3:07 PM IST
TOPICS:
BBL Big Bash League Cricket Australia Lee Germon Sydney Thunder The Gabba 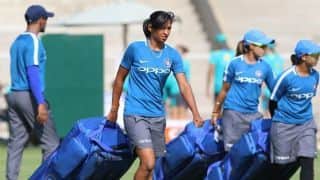