Hobart chased down a target of 162 set by Sydney Sixers with five wickets in hand and one ball to spare at the Blundstone Area, Hobart

Hobart Hurricanes maintained their unbeaten streak in the Big Bash League 2018-19 with their 5th straight win on Friday.

Hobart chased down a target of 162 set by Sydney Sixers with five wickets in hand and one ball to spare at the Blundstone Area, Hobart, riding on opener D Arcy Short s 42-ball 64 and George Bailey s 17-ball 30-run cameo.

Opting to field first, Hobart had reduced Sydney to 27/2 with Johan Botha claiming both the Sydney openers Joe Denly (10) and Justin Avendano (5) before Sydney skipper Moises Henriques and Daniel Hughes combined for a stand of 67 runs for the third wicket.

Henriques departed after scoring 31 off 24 balls courtesy a stellar run out effort by Short off his own bowling.

Hobart then pulled things back with the wicket of Hughes (61 off 40 balls), taken by Botha. Jofra Archer and James Faulkner finished strong for Hobart with the ball even as wicketkeeper batsman Josh Phillippe (11) and Tom Curran (19) took Sydney s total to 161/8 in 20 overs.

In reply, Hobart lost their in-form skipper Matthew Wade early for 15 to Curran. But Alex Doolan and Short added 62 runs in quick time for the second wicket to put Hobart on track. Sydney though fought back with the wickets of Doolan (28) and Short in under four overs, before Bailey got in to the act taking apart Sean Abbott.

With the equation down to 5 needed off six, Bailey was removed by Ben Dwarshuis, but Faulkner and Simon Milenko knocked off the remaining runs with one ball to spare. 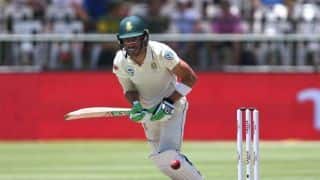