Dhaka: The head coach of Bangladesh‘s national cricket team has resigned, the sport’s board said Thursday, amid reports of his taking charge of the Sri Lankan team. Chandika Hathurusingha, who is Sri Lankan, tendered his resignation in a letter during Bangladesh’s disastrous tour of South Africa in October, Bangladesh Cricket Board President Nazmul Hasan told reporters. “As far as I remember, he submitted a letter to me in early October. He didn’t give any specific reasons. He only said he wasn’t interested anymore,” Hasan told reporters in Dhaka. “He is a professional coach. We will deal it professionally. We won’t force him but will ask him about the reason,” he said. Chandika Hathurusingha resigns as Bangladesh head coach?

Sri Lankan newspaper Ceylon Today reported Thursday that Hathurusingha was on the verge of signing up with the Sri Lanka Cricket (SLC) as the national team’s head coach. Quoting sources, the newspaper said the SLC had reached an agreement with Hathurusingha regarding his remuneration package. Hathurusingha is currently contracted with the BCB until World Cup 2019 and is widely believed to be one of the highest-paid cricket coaches in the world. Under Hathurusingha, perennial minnows Bangladesh have made rapid strides in world cricket, reaching the semi-finals of the Champions Trophy tournament in England this year.

Since he replaced Australian Shane Jurgensen in 2014, Bangladesh have also reached the quarter-final of the World Cup in 2015 and won one-day international series against Pakistan, India and South Africa in the same year. They also won a Test match against a visiting England side in 2016 before beating Sri Lanka and Australia in Tests in 2017. Hathurusingha, however, came under criticism during Bangladesh’s recent tour of South Africa, where the team failed to register a single win.

His name was first discussed as a potential Sri Lanka coach in June after the resignation of South African Graham Ford. Ford stepped down in late June, halfway through a 45-month contract and just two weeks after the team’s early exit from the Champions Trophy. The team have had an interim coach since Ford stepped down. Hathurusingha played 26 Tests and 35 ODIs for Sri Lanka before becoming Sri Lanka’s assistant coach under Trevor Bayliss before being sacked. He then moved to Australia and landed a job as a coach of New South Wales before taking over the head coach position of Bangladesh. 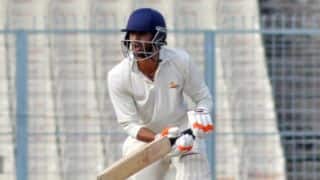