There have been talks about Mushfiqur giving up his wicketkeeping and captaincy roles, focussing only on his batting.

A lot have been debated over Mushfiqur Rahim s role in the Bangladesh side as a captain/wicketkeeper well before the Australia series. Post Bangladesh s loss against Australia in the final Test, Mushfiqur was unsure about his role in the side while addressing the press conference. There have been talks about Mushfiqur giving up his wicketkeeping and captaincy roles, focussing only on his batting. Taking a dig on the captain, Bangladesh Cricket Board (BCB) s President Nazmul Hasan, termed Mushfiqur as problematic. If Mushfiqur gives up his wicketkeeping role, Liton Das will be handed over the gloves. The less the burden on Mushfiqur, the more he can focus on his batting skills and move up the order as well.

Mushfiqur, however, feels he will have a better idea about what he is expected to do in the Test side if the board top officials come forward and explain it to him. When asked to Nazmul about Mushfqur s comments, the President lashed out on the captain, I think the problem lies with him and it is clear. Doesn’t Masharfe do captaincy? He did not face any such problem. I can write it down… Shakib will not face such an issue when he is leading the Twenty20 side. The decision lies with the captain. We can give a strategy from outside but it is the captain who takes the decision. Can you make Mashrafe change his mind? If he thinks someone should be out to play, he will make sure he goes there, as quoted on ESPNcricinfo.

Mushfiqur was given the option of playing as specialist batsmen for the Australia series apart from trying to bring him up the order, We asked him whether he will keep wickets. We have also asked him whether he is interested to bat at number four. I have to sit with him and clear these issues, Nazmul added.

In the first Test against Sri Lanka, Mushfiqur handed the gloves to Das. However, in the next match he was back behind the stumps. That has hampered the prolific batsmen and Mushfiqur admitted that he has no control over the matter, It is not up to me. It was not my decision not to keep wickets in Sri Lanka. I don’t have any problem keeping wickets. I want to contribute to the team in any way possible for as long as I play. I will do as the team management says. You better ask this question to the higher authorities. It would (also give me a clear idea). 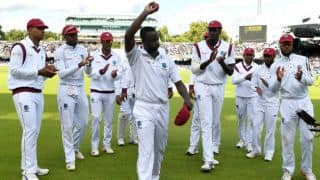