BCCI on Tuesday announced the squads for the Under-19 Challenger Trophy which will be held at Bilaspur in Himachal Pradesh from October 26 to 29.

New Delhi: The junior selection committee of the Board of Control for Cricket in India (BCCI) on Tuesday announced the squads for the Under-19 Challenger Trophy which will be held at Bilaspur in Himachal Pradesh from October 26 to 29. A total of 39 names have been announced with each of the squads – India Blue, India Green and India Red – comprising 13 players, according to a statement from the board. Meanwhile, The BCCI on Monday decided to indefinitely defer the awarding of its global media rights broadcast and digital which was scheduled for Tuesday as the Justice RM Lodha Committee is yet to appoint an independent auditor to oversee the entire process. FULL CRICKET SCORECARD: India vs New Zealand, 4th ODI at Ranchi

In a detailed media release, the BCCI explained its side of the story about the repeated communications with the Supreme Court-appointed Lodha Panel and how its commercial interests were being hurt due to the delay in the process of awarding tenders, while apologising to the potential bidders 18 from across the world. The release stated about BCCI seeking a directive on the process, details sought by the committee and the response from the board on Monday. Keeping in view the urgency in the matter, the BCCI has informed the Committee that the tender process being underway there were certain timelines that potential bidders were following. The BCCI also informed the Committee that a large number of potential bidders had travelled to the country from outside as bids had to be submitted in person, the release stated. BCCI postpones IPL media rights tender process 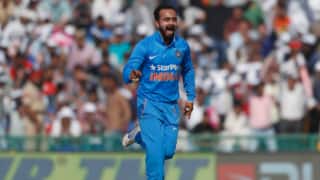