The best umpire in the domestic cricket has been awarded to Shamshuddin.

8.10PM: The Dilip Sardesai Award for being India’s best cricketer against the West Indies in November 2013 has been given to Rohit Sharma.

8.07PM: Ravichandran Ashwin has been honoured with the Polly Umrigar Award for the year 2012-13. Ashwin thanks the BCCI and his Indian teammates for the achievement.

8.05PM: The Lala Amarnath Award for Best All-rounder in Ranji Trophy 2012-13 has been awarded to Mumbai cricketer Abhishek Nayar.

7.55PM: Akshar Patel from Gujarat wins the Best Under-19 Cricketer of the Year award.

7.50 PM: The best umpire in the domestic cricket has been awarded to Shamshuddin.

The Board of Control for Cricket in India (BCCI) Annual Awards are being held at a suburban hotel in Bandra, Mumbai on the eve of January 11, 2014.

Farokh Engineer, 75, and his one-time India teammates Bapu Nadkarni and late Eknath Solkar, are to receive the special award for their contribution to Indian cricket at the function.

Among those to be handed over the awards is Ravichandran Ashwin, who will get the Polly Umrigar Award for the best cricketer of the year 2013 and former India captain Kapil Dev, who would be bestowed the prestigious CK Nayudu Lifetime Achievement Award.

The New Zealand-bound Indian ODI squad is expected to attend the function before departing in the early hours of Sunday. 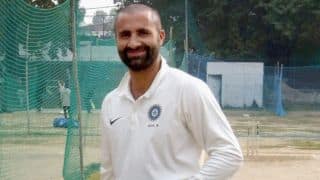