In a move which has triggered a fresh controversy, the BCCI on Wednesday asked the Cricket Association of Bengal to appoint East Zone curator Ashish Bhowmick to prepare the Eden track in place of veteran Prabir Mukherjee, who has been in charge of the historic Eden Gardens pitch for decades. 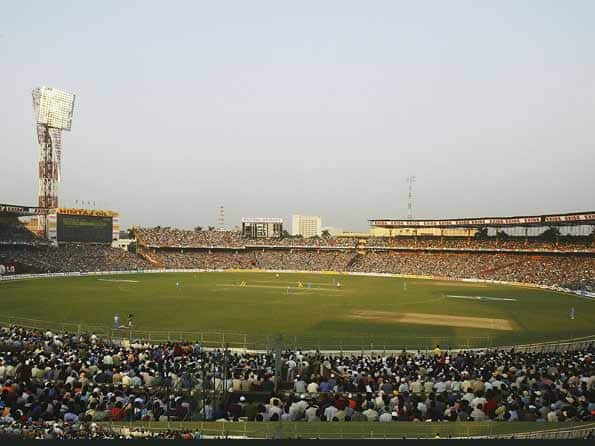 In a move which has triggered a fresh controversy, the BCCI on Wednesday asked the Cricket Association of Bengal to appoint East Zone curator Ashish Bhowmick to prepare the Eden track in place of veteran Prabir Mukherjee, who has been in charge of the historic Eden Gardens pitch for decades.

Acording to reports, octogenarian Mukherjee, who looks after the Eden strip, has been sidelined due to his differences with Indian captain Mahendra Singh Dhoni, who insisted for rank turners from day one of the Kolkata Test against England, starting December 5.

Bhowmick, who hails from the Tripura Cricket Assocition (TCA), is arriving this evening following BCCI instruction.

“He is going there as per BCCI’s instruction. But I’ve no idea whether he has replaced the local curator there (Prabir Mukherjee). I’m not aware of the details,” TCA secretary Arindam Ganguly told PTI.

CAB joint-secretary Sujan Mukherjee, however, termed Bhowmick’s visit as a “routine” inspection tour and maintained that the 83-year-old Mukherjee has not been replaced.

“It’s a routine visit to assess the pitch and conditions which happens every time before a match. Prabir Mukherjee remains the Eden curator,” Sujan Mukherjee said.

The BCCI’s move to send Bhowmick to Kolkata ahead of the third Test has raised many eyebrows as, only on Sunday, Daljit Singh, who is the chairman of BCCI’s ground and pitches committee, did a recce of the same Eden track.

Senior BCCI official and IPL chairman Rajiv Shukla refused to read too much into the matter and said the decision to send Bhowmick to Kolkata was taken by the Board’s ground and pitch committee.

“All the curators work independently. This is absolutely wrong (that Dhoni had a role). No decisions are taken on the advise of anyone. The grounds and pitch committee of the BCCI took the decision in this matter,” Shukla said.

Outspoken and forthright, Mukherjee has in the past criticised Dhoni for his demands on pitches, and this time too the veteran reportedly had a difference of opinion with the Indian skipper on the nature of track to be prepared for the Eden Test.

In the second Test, Wankhede curator Sudhir Naik, offered a turner at Mumbai which helped spinners from Day 1, but the move backfired as India suffered a humiliating 10-wicket loss to England who levelled the series with the emphatic win.

Even afer being thrashed on a customised Wankhede track, Dhoni had insisted for a similar rank turner for the Eden Test.

Mukherjee, however, crticised Dhoni and demanded a written instruction from the BCCI to prepare a turner, saying, “Two pitches can never be the same, logically. It’s most unethical if the India captain makes such statements in public. He’s passing such comments every now and then, which is really unfortunate.”

Both Dhoni and Eden curator, Mukherjee are known for their critical remarks against each other.

During England’s last appearance here (for an ODI on October 25, 2011), Dhoni had termed Eden an “ugly wicket”.

Incidentally, India has won the match to complete a 5-0 whitewash.

BCCI kept in the dark about Sachin Tendulkar's meeting with selectors