To ease the entry of the new teams like Puducherry, BCCI had relaxed the rules that defined who a local player is.

The Cricket Association of Puducherry has come under the scanner for fielding more than the allowed number of outstation players, technically as local players, and the BCCI are set to cancel the registration of eight of their senior team players for flouting eligibility criteria in the ongoing Vijay Hazare Trophy 2018-19.

To ease the entry of the new teams like Puducherry, BCCI had relaxed the rules that defined who a local player is.

However, BCCI permitted the registration of even those players who have only been working or studying there since August 2018. Accordingly, Puducherry fielded players like Shashank Singh and Sagar Trivedi, who had very recently played for Mumbai, as local players.

The outstation players for Puducherry are skipper Abhishek Nayyar, Pankaj Singh and Paras Dogra. Both Shashank and Trivedi had played a pivotal role in Puducherry s maiden win in the Vijay Hazare Trophy beating Manipur by eight wickets.

But, complaints from other boards forced BCCI to look in the issue and found out that ST Xavier, Nikhilesh Surendran, Iqlas N, Abdul Safar VS, Yash Jadhav, Trivedi, Ashith Rajiv and Shashank have flouted the eligibility criteria.

As per Indian Express, objections came from Ratnakar Shetty, former general manager, game development at BCCI. “I was shocked to hear that BCCI has given special permission to include more than the (cap on the) number of outstation players in the team,” Shetty wrote in an e-mail to BCCI CEO Rahul Johri which was published by the Indian Express.

In a report in PTI, as per the letter written by GM (Cricket Operations) Saba Karim, all the eight players were found to have submitted either their employer certificate or proof of education which is not even a month old In fact one player Ashith’s Aadhar Card as proof of residence was issued only on August 27, 2018.

Karim clearly stated that as per rules all those studying or residing in Puducherry from August 2018 wont be considered eligible to play for the state. 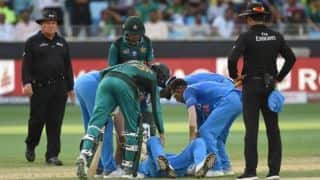 Will come back stronger: Hardik Pandya